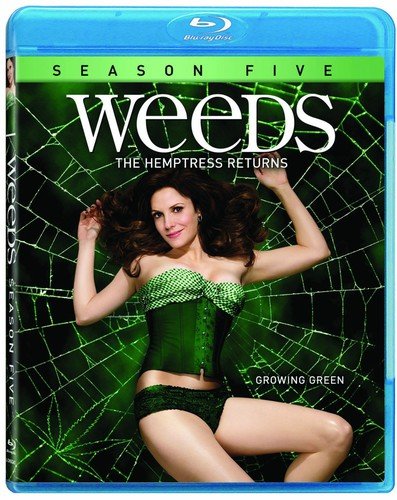 The hemptress returns in the complete fifth season of the Showtime Original Series of WEEDS. When pot-selling soccer mom, Nancy Botwin, took her homegrown business south of the border, she found the grass wasnt greener on the other side. Now shes pregnant with the child of a powerful politician turned dangerous drug lord or is she? Doug and Silas are trying to branch out on their own, Andy is looking to score, and Celia attempts to turn the tables on her kidnappers. With enemies out to smoke the Queen of Green, Nancys sure to find a whole new crop of trouble in an all-new season of WEEDS starring Emmy and Golden Globe winner Mary-Louise Parker. (studio)

Though "eccentric" is perhaps a given when it comes to describing the comedy-drama Weeds, the series' fifth season seems to test the boundaries of that description with a story arc that pushes the misadventures of suburban pot dealer Nancy Botwin (Golden Globe winner Mary-Louise Parker) into very unusual territory. Having saved her skin in the finale of the previous season by admitting to Mexican drug lord Esteban that she was carrying his child, Nancy spends much of the season attempting to keep her extended brood/employees out of trouble as she extricates from this current pickle. However, said family is barely able to stay afloat without her lopsided guidance; brother-in-law Andy (Justin Kirk) develops feelings for her before falling for her obstetrician (Alanis Morrissette), while eldest offspring Silas (Hunter Parrish) attempts to tackle the legitimate side of pot (a medical marijuana dispensary) with the now hopelessly fogbound Doug (Kevin Nealon). And youngest son Shane (Alexander Gould) continues his spiral into what can only be described as near-lunacy as he dabbles in alcoholism, animal slaughter, masochism, and finally, homicide. Though season 5 reads like the same mix of black comedy and sugar-fizz indie quirk as the previous four, the reality is that the recipe is off here; moments of honest drama and character development have been sacrificed for shock effect, which blunts the solid work done by Parker and her talented castmates (most notably Kirk, Nealon, and Morrissette). In short, the fifth season of "i"Weeds feels rudderless--an uncomfortable position for any veteran show.

"p" The extras on the season 5 set feel equally off-kilter. Commentary tracks are present for 7 of the 13 episodes, most of which are handled by series creator Jenji Kohan, who seems either unable to or uninterested in providing more than perfunctory observations. More informative and entertaining are the tracks with Parrish and Nealon's thoughts on "Van Nuys" and Elizabeth Perkins on "Glue," on which she's joined by her onscreen spouse and daughter, Andy Milder and Allie Grant. Also worth checking out is University of Andy, a series of 12 webisodes featuring dubious life advice from Kirk's character, and "i"Crazy Love, a brief but thoughtful examination of the characters' romantic lives as viewed by the cast and crew. More extraneous is Really Backstage with Kevin Nealon, which is a perfunctory behind-the-scenes glance, while Little Titles offers more enervated commentary from Kohan, this time in regard to the opening titles. A gaggle of bloopers, a promo spot with Nealon parodying Barack Obama's "Yes We Can," and the animated "i"History of Weed are all forgettable. "i"--Paul Gaita

Welcome To The Midland Hotel

The Midland Railroad Hotel is a historic hotel and restaurant with modern amenities located in Wilson, Kansas off of I-70. Originally built in 1899 by Philadelphia transplant Wilke Power as the Power Hotel, the Midland Railroad Hotel was once considered among the premier hotels in the Midwest. In 1997, the Wilson Foundation purchased the historic building, and launched six-year, $3.2 million renovation, earning the organization a Kansas Preservation Award for its artistry restoration. The Midland Railroad reopened in 2003 to its 1920s glory and is listed on the National Register of Historic Places since then.

“If you are looking for a relaxed stay in a charming hotel, look no further. The town is lovely, and the people are friendly. Definitely a great stay.”

“This hotel is exceptional! Super clean, very friendly staff, and a pub (The Sample Room) with great food right on site. It is only a few miles from Wilson Lake were you can find hiking and mountain biking trails.“

“If you are a railroad enthusiast, love history or just the road less traveled, this hotel is the place for you! In the charming town of Wilson Kansas, there is a gem of a hotel. Beautiful restored hotel, wonderful beds with luxury bedding. This place is so elegant, from a time gone by. Breakfast is basic continental, but very good. Stop and spend a day or two. Lots to see and do in the surrounding area. Owned by a mother & daughter, support small family owned business.“

“Great location. Good was good. Seating section was good. Everything was well organized. Staff were friendly and nice.“

“Amazing historic hotel if you are traveling I-70 skip Hays, Russel or Colby and stay at the Midland Railroad in Wilson KS 2 miles south of exit 206!“

“This historic hotel is a gem in central Kansas. It is a throwback. The restaurant is excellent and the rooms are authentic and cozy. I would travel out of my way to stay here again.”

“We loved this renovated hotel! Our room was a bit small, but we knew to expect that due to the type of place this was. It was restored beautifully & we felt like we were stepping back in time. The whole town has the same feel. The town has work alarms that sound at 7 am, noon, & 5 pm, which for us just added to the feel of many years ago, but might bother some. If you can’t stand tight places, this is probably not for you, but if you love historical places, you will love it here!”

“Always a great memory to add to my life. Loved the live music on the patio. Great wine and service.”

“I was transported back to the old west, if you’re tired of staying at run of the mill chain motels, than try this gem. It was once an Opera House, and is full of beautiful woodwork, and authentic pieces of Americana. I’m glad I didn’t get to try out their storm shelter in the basement!”

“Super cute hotel in a historic downtown. We loved the historical charm and friendly staff. We would definitely stay there again.”

“Staying in this old Historic Hotel is a memorable experience. It’s conveniently located a short distance off of I-70. Wilson is the Czech capital of Kansas. The largest Czech egg in the world it’s right across from the hotel. If your a history buff I recommend you stay at this hotel, you will not be disappointed.”

“Not sure I’ll ever make it to your neck of the woods, but I am eternally grateful you took care of Jeremy Miller with Walk Across America. Selfless acts like this that actually mean something is A HUGE deal, and not enough businesses do it. I’m positive this hotel is a wonderful organization managed and staffed by outstanding individuals.”

“Very unique spot in the heart of Wilson! Extremely clean room and elegant hotel. Well worth the stay and a great value!”

“Our host has done a wonderful job bringing this hotel back to life. It’s a step back in time, enjoyed the history, and artifacts. Bonus if you are of Czechoslovakian descent.”

“What a cool place this is! Loved that it still has feel of a historical place with all the comforts of today. Beautiful garden area out back, we sat and enjoyed the surroundings. Got to briefly chat with Melinda and she is super sweet! Wish we would have known about this place the last four years of traveling through Kansas. Would have stayed here every time!!”

“The hotel was an amazing stay! If you love historical places then you’d loved this hotel and town.”

“Comfortable beds, a good place to stop after a long day on the road. Nice breakfast. We enjoyed our stay very much.”

“Clean, quick responses, informative. The Sample Room bar in the basement is excellent with a fantastic spicy chicken!”

“A must stop if passing through Kansas! This hotel has a fabulous atmosphere and amazing amenities. I’ve stopped once a year for the past three and it gets better every time. There’s a small restaurant and bar downstairs with local beers and amazing food!! Staff brought my food and drinks to the room-which was exactly what I needed after a 6 hour drive after work. It’s a small staff and you can tell everyone is dedicated to making you feel welcome. The owner’s daughter makes the kolache for breakfast every morning and it is SPOT ON! Delicious!!! The beds are plush and comfortable. The back patio is cozy and charming. I already look forward to going back next year!”

Dustin Arbuckle and the Damnations

Haymakers in The Midland

Have Your Wedding
At The Midland

The Midland’s historic charm makes this an ideal setting for wedding ceremonies and guests. Learn more about our wedding packages & rates.