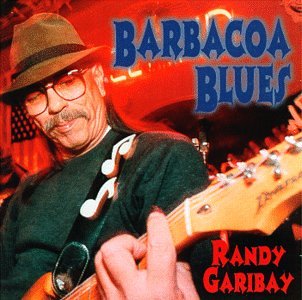 "Barbacoa Blues", the most recent CD of Chicano blues man Randy Garibay has been described as "at once solidly traditional and refreshingly out of the ordinary." Produced by Randy Garibay and Jim Waller, the CD showcases Garibay's soulful voice, which many compare to Bobby Blue Bland, his equally impressive guitar playing, and his creative songwriting. Eight of the ten tracks are originals by Garibay and five of his originals ("Chicano Blues Man", "Barbacoa Blues", "Too Close to the Border", "Viuda Negra" and "Curandera") are in Garibay's hallmark style of Chicano Blues--horn-driven Ramp;B delivered with sometimes bilingual lyrics and born of his South Texas Chicano experience. The CD also includes a beautiful original country song ("What Did You Think"), an original salsa ("El Chupacabra"), an oldies style original ("Tell Me Why") and two classic cover songs--traditional blues song "Two Steps from the Blues" and the jazzy "I Can't Stop Loving You Baby".

"At 57, Garibay can still coax sinfully soulful sounds from his guitar with seemingly effortless ease, and his voice has lost little of its rich timbre. Garibay's colleagues in his band Cat's Don't Sleep--Rocky Morales (saxophone), Al Gomez (trumpet), Jack Barber (bass), and Urban Urbano (drums)--rank among the finest players the city has produced. And while other men his age might be eagerly eyeing retirement, Garibay seems to regard his 40-plus years as a professional musician as only another milestone in an ongoing love affair, with the best years yet to come, "I'm having a ball," says Garibay, adding, "It's more fun now than when I was in my 20s." -- Bill Ramsey, San Antonio Current, May 29-June 4, l997

"Chicano blues man, Randy Garibay is a San Antonio, Texas legend, rocks with the best of 'em with his latest CD recording, "Barbacoa Blues." Randy is considered one of the best Ramp;B performers of our time and creates a rich musical style that includes everything from blues, to Bebop, to Tejano. His newest CD opens with "Chicano Blues Man", and is followed by an array of songs that use down to earth lyrics that will have your head shakin' with amazement. Most songs are originals by Randy, highlighted by masterful blues guitar...."Barbacoa Blues" delivers more than a typical Tex-Mex sound from Randy, and the cuts from the CD are bilingual in spots. Truly a Chicano blues man, you have to listen to his music to appreciate what everybody says about Randy." -- Steven Caudillo, Latin Style magazine, Volume IV, Number 3, May, 1998

"Garibay's new album, "Barbacoa Blues," complete with back cover testimonials from the Righteous Brothers, Clifford Antone, Longtime protg Doug Sahm and others, is at once solidly traditional and refreshingly out of the ordinary. Garibay's voice, a classic blues-drenched Ramp;B growl impressive enough to draw comparisons to the legendary Bobby "Blue"Bland, works its way smoothly through a wide assortment of original songs infused with unique Tex-Mex sensibilities. Nowhere else will you find tunes like "Chicano Blues Man," El Chupacabra"or "Too Close to the Border." -- Michael Point, Austin American Statesman, April 15, l998

"With a voice reminiscent of Bobby Bland, a guitar style that fuses slick picking and fat chords, a repertoire that ranges from bilingual originals to big band blues obscurities and the ability to entertain the most esoteric of crowds, Garibay is a Texas blues treasure...There are priceless jewels among the 10 cuts. The title track, "Too Close to the Border" and "Viuda Negra (Black Widow Woman)" are as good as any contemporary blues. His cover of the Bland classic "Two Steps From the Blues" would make Bland sweat--and applaud."

My recordings are a sort of self portrait. I write about my barrio, my people and things that I have experienced in my career and my personal life. I also try to show off my talented band members--Al Gomez (trumpet), Rocky Morales (saxophone), Urban Urbano (drums) and my brother Ernie Garibay (bass and vocals). I believe that I am the originator of Chicano blues, a style which I have been doing for many years and is quickly catching on with other Chicano musicians. I want my music to communicate humor, the pride of my Chicano upbringing, my versatility. I always believe that if you can make people feel proud, make them laugh, cry, or piss them off, you have a winning combination!

A Self proclaimed "late bloomer" on guitar, Randy's brother introduced him to a Sears and Roebuck model on his eighteenth birthday. In l961 he joined a local outfit the Dell-Kings as guitarist and lead singer, playing locally before heading for Los Angeles. Shortly thereafter the group headed for Las Vegas. Randy and the Dell-Kings headlined many of the Go Go shows that were popular in Las Vegas during this era. They also worked with a list of players that reads like a musical Who's Who list: Jackie Wilson, Sammie Davis, Jr., Martha Ray, Judy Garland, Pete Fountain among others.

After changing their name to Los Blues, Randy and the band embarked on an almost constant touring schedule during the 60s and 70s. During this time they had the opportunity to play alongside such notable rhythm and blues artists like Curtis Mayfield and the Ojays and such prestigious places as Madison Square Garden and the Waldorf Astoria Hotel in New York City, Vancouver and Honolulu.

Now that he is back home in Texas, Randy plays what he knows, using his soulful voice and equally expressive guitar playing with his band, Cats Don't Sleep. "Barbacoa Blues" is Randy's third recording. Previous recordings are "Brown Eyes" in released in l989 and "Los Blues Volume I", released in l969. Randy is working on his next CD to be released in l999, titled "Still Singing Los Blues".

Accolades for Randy include: selection as a Touring Artist by the Texas Commission on the Arts for l999-2001; selected to be a South by Southwest Music Festival Showcase performer, l999; an interview on National Public Radio program, "Latino USA", in l998; a featured performer at the Chicano Music Awards in l998; winner of the West Side Rhythm amp; Blues Award, l996; and winner of the Pura Vida Hispanic Music Award, 1994 and 1995.

SpeedMarker: Created for automation - from single parts up to serial production.

Create graphic, photo and text elements and quickly make adjustments thanks to the integrated workflow. With one software that is both a graphics design software and laser program.

Multiple lasers, infinite number of users, one web-based platform. Ruby® is not just a laser software, Ruby® is a platform. Digital to the core.

One laser software from manage, design through preparation and production. The cloud-based material database helps to achieve the best laser results.

What do you want to laser?

Trotec Laser will be at FESPA 2021 in Amsterdam

FESPA brings together the best-known companies in the digital printing sector. Trotec is definitely one of them. For this reason, we are proud to...

Ruby® makes working with your laser simpler and faster. Digital to the core. Explore it now!

⇒ July 15, 2021 at 12 pm EST ⇒ Join us! See firsthand how Ruby® will make working with your laser simpler and faster.